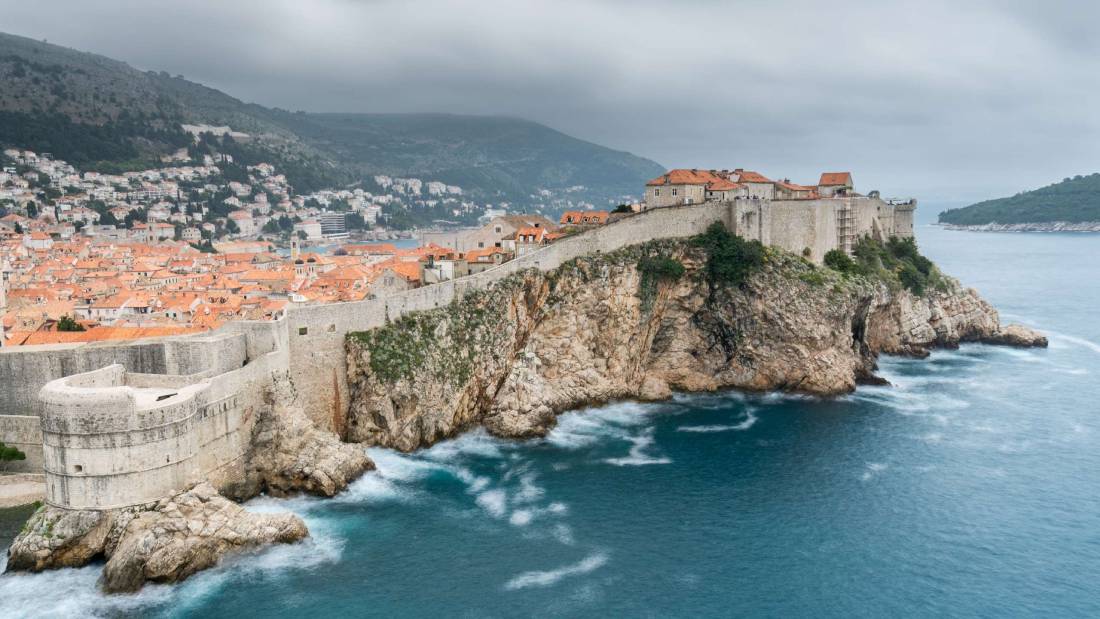 Old City of Dubrovnik Croatia for the history lover in you

Getting off the ferry and onto the pier in the Old City of Dubrovnik was like stepping back in time. Imposing medieval walls rose in front of us in majestic glory as the smooth marble-paved road glistened in the sun before us. Just like many must have done before, we made our way to the Pile Gate, the main entrance to the walled city. With our mouths hanging open and our minds blown we couldn’t wait to discover all the things to do in Dubrovnik.

History of the Old City of Dubrovnik

The Old City of Dubrovnik is often referred to as the ‘Pearl of the Adriatic.’ The original walls that stand guard around the parameter date back to the 10th century. These walls have been fortified over time by famous architects and leave behind an outstanding example of human determination.

Although it was founded by the Romans, Dubrovnik has also been under the Byzantine and Venetian rule. It wasn’t until the latter part of the 14th century that it became the independent Republic of Ragusa.

Its prime location on the Dalmatian coast has positioned the city as an important Mediterranean port for centuries. At one point, it had a fleet of over 500 ships!

Today, much of what makes up the city dates back to reconstruction after the earthquake of 1667. These days, these walls are a popular destination for those looking for things to do in Dubrovnik. It’s easy to see why.

The city’s magnificent architecture is largely due to wealth that was generated by the many trade routes of the past. Dubrovnik was severely bombed during the Yugoslav wars in the early 1990’s and has now been restored thanks to funding from UNESCO.

Prepare to leave your heart behind

From the moment we arrived, I loved Dubrovnik. Maybe it’s the history nerd in me, or maybe it’s the photographer that loves architecture. We were all in our element here. The sun was shining, the ocean waves crashed in the distance and I stood there wondering why it took me so long to get here.

The city within the walls has a great number of churches, museums, shops, cafes and restaurants. You can spend hours just walking around marvelling at the beauty around you. If you want to see a bit more, take a walk along the city walls. It’s a walk that really is one of those things to do in Dubrovnik that will leave you speechless.

I won’t lie, I was very tempted to glide on the sleek stones, made smooth by weather and the countless feel that polished them over the centuries. The buildings, the fountains, the steps are all made out of marble (although some say it’s limestone) and create a sense of being inside a fancy carving. Everything is spotless despite of all the tourists that come there in troves. We were lucky to be there without any cruise ships, which probably would have made the trip less enjoyable.

The views of Old City of Dubrovnik

As you wander along the narrow walls, you can imagine the watchmen that walked along the same walls so many centuries ago. Did they marvel at the city below that was under their watch? Maybe they wandered what lay across the dark blue waters and what dangers lurked out there? Or most likely, the were frying in the heat just like we were. As the walls, like the rest of the city, are built from smooth and shiny stone. There isn’t that much greenery around to provide shade. You should definitely bring a hat and sunscreen if you’re visiting during summer.

The walls do offer outstanding views of the city and the water around it. All the orange rooftops glisten in the sunshine – uniform and orderly. You can just imagine the hustle and bustle of the days gone by when this was an active shipping port. Merchant and seamen arriving daily to this fortified city that seems to spill into the water from the coastline.

If you want and even better view of the city, you must take the Dubrovnik cable car for even more outstanding views. It’s located just outside the city gates and goes up to the Imperial Port on top of the Hill Srđ. The fort was built by Napoleon and it opened on his birthday. The man didn’t do anything half way.

If you are a huge fan of the show Game of Thrones, you might recognize Dubrovnik as the setting for some of the scenes in the show. The production has brought a lot of fans to visit what is the King’s Landing on the show. The place is spectacular so it’s easy to see why they would choose this as the location.

There are even Game of Thrones tours that you can take to learn more about the production in Dubrovnik. I’m not a huge fan of the show, but when the opportunity came to sit on the replica of the Iron Throne, I knew I had to do it. I can see why so many fought so hard for it. It’s pretty spectacular, even when it’s not the real thing.

The show uses a lot of CGI to make King’s Landing even more spectacular, but you will definitely recognize it once you see it in person. Even if you’ve never watched the show, the location will impress you.

Dubrovnik – where to stay

You can stay in the heart of Dubrovnik in the Old City, or outside of it. There is another, modern part of Dubrovnik outside the medieval walls that offers a number of accommodations, restaurants and shops. If you want to spend more time here, there are many wonderful options to choose from.

We opted to stay in a nearby town called Cavtat. Located near the airport, it offers beautiful views of the sea, little restaurants and cute shops. Cavtat is a nice sea-side resort with hotels, villas and yachts. It’s also a short boat taxi ride to Dubrovnik, which made it convenient to get in and out of the city.

Cavtat is an ancient city set on the shores of the Adriatic Sea. Here you’ll find pebble beaches, artsy attractions and ancient Illyrian necropolises. Cavtat feel similar to many small Italian towns on the other side of the sea because of its geography and climate. The food is outstanding, the locals are friendly and you can explore other Croatian island with ease.

Pearl of the Adriatic

Dubrovnik is a beautiful place, but as many others, it has become very touristy. We managed to visit on a day without cruise ships, which made it less crowded. You can definitely spend the day just sitting on a patio and people watch. Time doesn’t move too fast in this old Medieval fort. I’m okay with that.

Have you been to Dubrovnik? What did you think? Let me know!

10 Tips for surviving winter in Canada

15 Stunning castles in Poland you should visit

10 Overlooked countries in Europe you should visit...

Oh I have a strong feeling I would love this city! With all that architecture and history, what’s not to love about Dubrovnik. Great shots Kasia. X

Thank you! It was so beautiful 😍

Ah, so I get to read your version of your visit now ! Clearly you had a great time and I guess the cherry on top was sitting on the Iron Throne 😀 Dubrovnik is just so fabulous x

It sure is! Loved the Iron Theone! 😀

I unfortunately have not been there but am loving your photos. What a beautiful city.

Thanks Sue! Hope you get there one day. 👍🏼

Wow. Did not know of a large earthquake in the 1660s that caused that much damage. Come to think of it, did not know that area was prone to earthquakes too… but indeed it is now a very hot destination – Dubrovnik that is and we would like to touch it along with some of the other balkan countries.

I’m headed to Croatia in a few weeks and I’m so happy to finally see Cavtat mentioned in a travel blog! Can’t wait to visit and see those Italian vibes for myself!

So jealous! Cavtat is beautiful. Are you going to stop by there on your trip to Croatia?