You might like this
Rising popularity of dark tourism, what’s the appeal?
Ultimate guide to things to do in Cagliari...
Visiting the Forbidden City in Beijing
Travel to Toronto: ultimate guide for planning your...
Casa Loma, the Toronto castle you need to...
Visiting Shanghai, Pearl of the Orient
10 easy steps for overcoming being camera shy...
Discovering Naples underground with Napoli Sotterranea
Awesome Hong Kong bucket list itinerary
Problem with “instagramable” destinations label 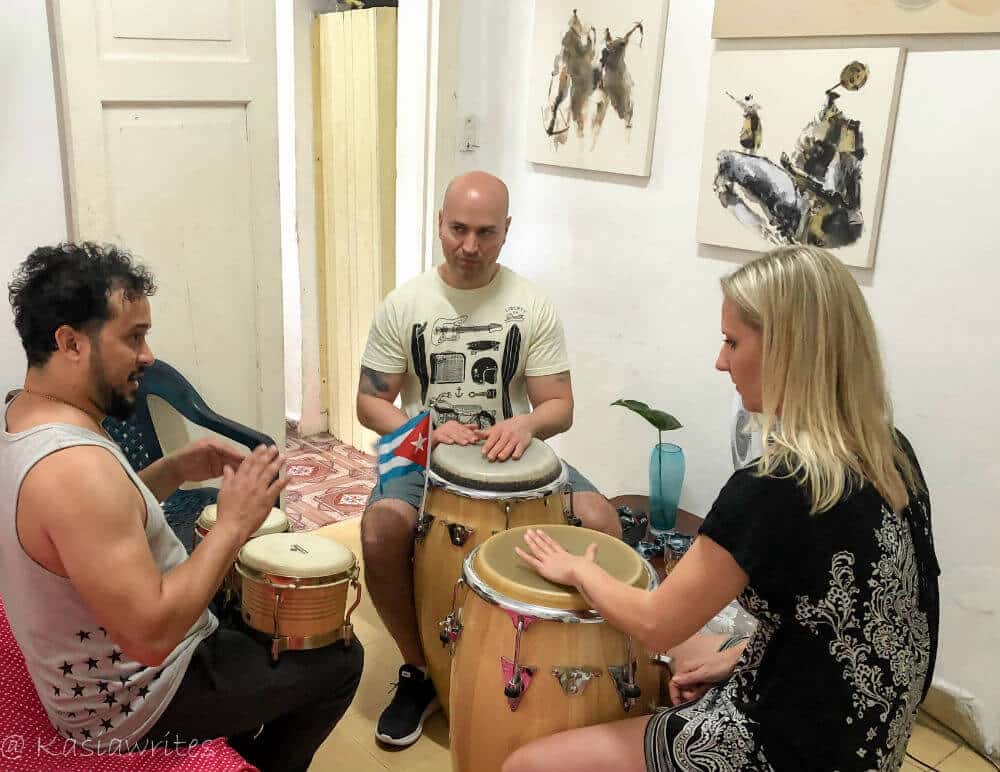 SPONSORED – You simply can’t go to Cuba and not come face to face with its seductive sounds. Music simply intertwines itself in the fabric of the local culture and history, and it’s everywhere you go. Cuban music is full of influences and it is complex like the country itself. It didn’t take us long to jump at the opportunity to have a private lesson with some of the finest Cuban music artists. After all, cultural tours like this are the best way to learn something from the locals and meet the wonderful people who live there. 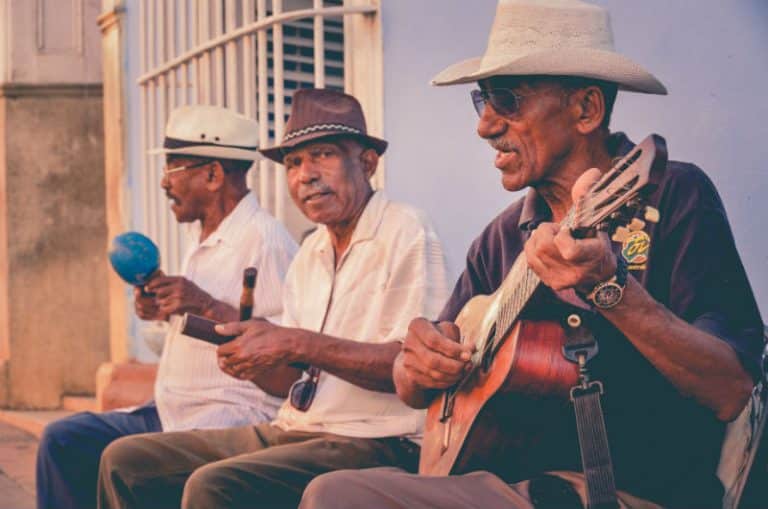 Despite not being able to carry a tune or play an instrument, I love music. I can appreciate almost any kind of melody, but the sounds in Havana are ones that make you groove as if you’ve been hearing them all your life.

It all starts with a small toe tap. Then your leg suddenly comes alive like a cobra hypnotized by the snake charmer’s pungi. Your body follows the sounds as your head bops along, transferring that sound awareness to your awakening shoulders.  Before you know it, your whole body is starting to move with the beat and you find yourself strangely in need of dance.

It’s  no wonder that Cuban music has greatly influenced Latin music worldwide, playing a role in the development of other well-known genres like jazz, salsa, nuevo flamenco in Spain, the Argentinian tango and many others. Just as complex, fascinating and beautiful as its architecture, Cuban music is a product of its history. 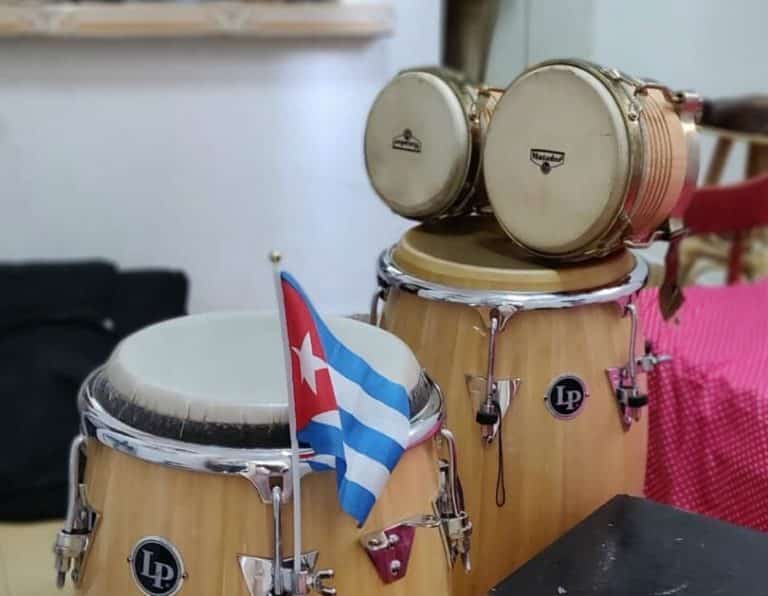 The many sounds of Cuba

Cuban music is a sophisticated blend of soulful melodies from Spain fused with the dynamic beats and percussions of Africa. These are the sounds of conquistadors, European masters and African slaves. A combination of religious rituals, human expression and resilience.

Many of the African people forced into slavery came from what we know today as Angola, Nigeria and the Congo to different parts of Cuba. They brought with them the music, dance and rhythms that were an essential part of their religious and cultural life at home. These elements, melded with the melodies and guitars of Spain created a genre called Afro-Cuban.

Son Cubano (son= sound), being the heart of Cuban music, combined European and African musical traditions. It’s said to be the most influential form of Latin American music, made popular during the 1930s and gaining popularity worldwide.

It is mind-blowing as to how many styles and genres of dance and music evolved over time. I think I might write a separate blog just on that topic as it’s so fascinating. From danzon, rumba, conga and musica campensina to the Cuban bolero, mambo, cha cha cha and salsa. I can’t even follow all the styles and their influences, as they are such foreign concepts to me. All I know is that I definitely want to learn more.

Our lesson on Cuban music

I must admit that I was a bit nervous about this experience. Every music class and lesson I ever sat through in school was torture. My inability to understand how to read the notes and successfully emit them from an instrument was always a source of frustration. If my teachers couldn’t get me to play anything after all these years, my odds weren’t looking so good.

However, I’m not a quitter, so I decided to go in with an open mind.

Our teacher, David is a musician for the band Buena Fe. Although unfamiliar to us, he’s well known in the Cuban music circuit. In addition, he also teaches music! We were in good hands although probably not his most talented students.

David is not the only talent in his family. His brother is a painter and his wife plays the violin. She was also on hand to demonstrate with David the basic beat we were going to learn. 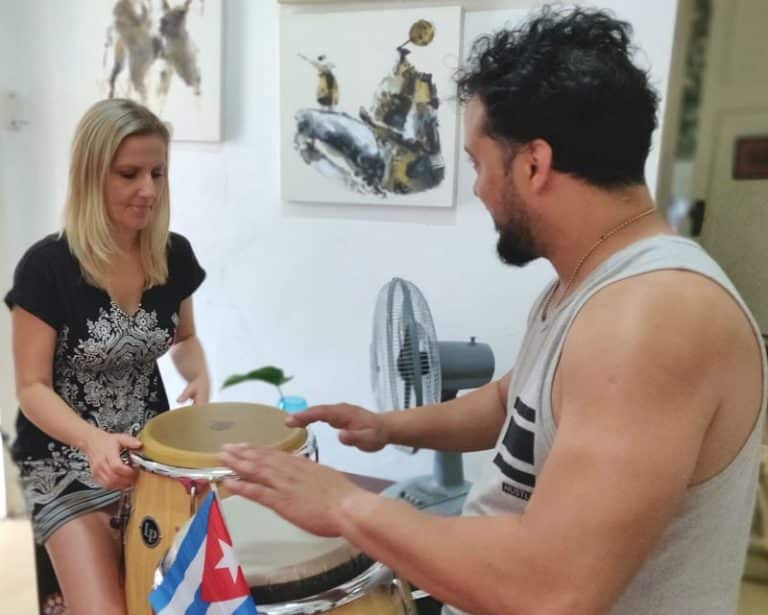 So, what can you expect from a visit to the home of a famous musician for a music lesson? You’re going to learn something new, pick up a trick or two and make a new friend.

David was the most relaxed and patient teacher we could as for. He made the whole experience an enjoyable one, to the point where I actually felt I finally got the basics. We drank some Cuban rum like old friends and tried our hand at the beat. 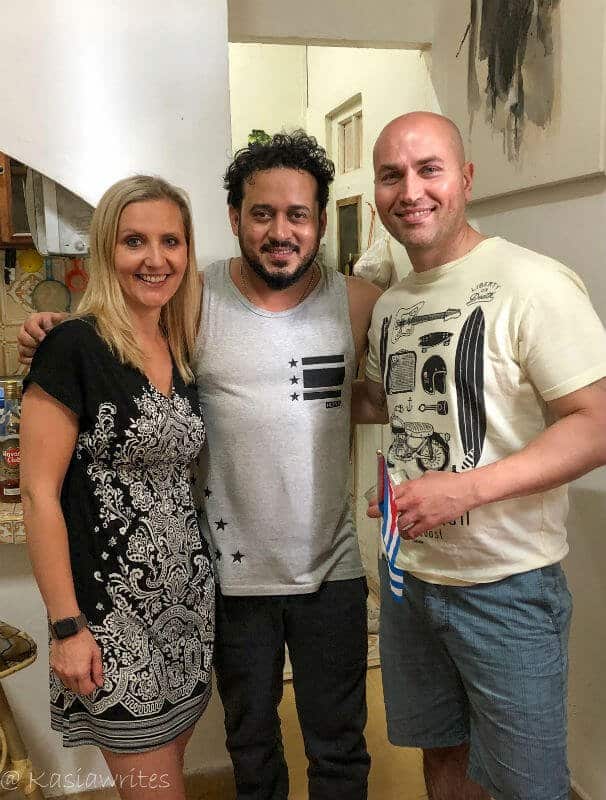 The basis of each song is a simple 1-2-3-4 count that expands into further combinations. To an untrained ear, this seemed too simplistic. How can all these vibrant and varied melodies have the same beat? Turns out, they do. Once we knew what to look for, we found the beat in other songs. Take that high school music teacher!

Cuban people have a reputation for being friendly and welcoming. David and his wife were no different.  They invited us to their home and shared their love for music with us. It was truly a wonderful experience. Could we have met at a studio or a music venue instead? Sure, but this made it more personal and special.

It was probably why I actually felt at ease and enjoyed myself despite being a terrible musician. Let’s be honest, Alex and I aren’t going to start a band anytime soon, but we know where to find people who make an art of it.

Cultural tours with Feel in Cuba

If you’ve been reading my blog for a while, you know that I love history and discovering exciting adventures that can teach me something new. Cultural tours are probably some of my favourite tours. They are usually unique and provide a hands-on experience that lets you embrace the local culture.

Our cultural tour with David was one of those unique experiences. It opened up a completely new world of fascinating history to me, as I definitely wasn’t aware of the importance Cuban music and its contribution to Latin American music. The experience was very personalized and I don’t think I would have gotten the same from a large group in a studio.

We did our cultural tour with Feel in Cuba. It’s a young company ran by tourism professionals with years of experience and a focus on exclusive experiences. The company offers personalized and custom tours for small groups including everything from cultural, religious and outdoor activities to hands on experiences like learning to dance from actual Tropicana dancers.

They can even design custom itineraries based on the duration of your visit and your interests.

As internet is very recent in Cuba, the best way to contact Feel in Cuba is through the company Instagram or Facebook page for prices and detailed tour information.

Disclaimer: Our tour with Feel in Cuba was complimentary; however, my opinion, views and photos are my own. 500 years of architecture in Havana: a historical walk through time

10 Reasons why we experience travel differently

8 lessons from travelling to Italy on a...

Good on you for going out of your comfort zone Kasia – this looks like a great experience.

Thank you! It was fun, enjoyable and I learned something new!

My husband would absolutely love this!