Top Posts
20 Remarkable UNESCO World Heritage Sites in Canada
Urbino: Italy’s spectacular Italian Renaissance town
The tourism conundrum and the uncertain future of...
15 fascinating people who changed the world of...
8 lessons from travelling to Italy on a...
Visit Qutub Minar: India’s incredible UNESCO Heritage Site
10 awesome things to do in Rio de...
9 exciting reasons to add Genoa to your...
Why you should visit Rome, the Eternal City
Exploring Riga, visitors guide to discovering Latvia’s capital

Home Europe Mykonos or Santorini? What you need to know

Mykonos or Santorini? What you need to know

As far as the Greek islands go, most people are probably most familiar with either Mykonos or Santorini. While both are excellent choices, you might have to choose only one of them to visit. If that is the choice you’re faced with, no worries. I got your back.

If you’re trying to decide between choosing Mykonos or Santorini, you’ll find a lot of similarities as well as differences between them. Both islands are part of the Cyclades group of Greek islands. The name Cyclades comes from the word kyklos, which means “circle.” While all of the Cyclades islands are amazing to visits, Mykonos and Santorini are one of the most popular and most visited. It’s easy to see why.

Mykonos is the name of the island with Mykonos Town as its largest centre. Likewise, Santorini is the island, with Fira as its main town. We stayed in both during our visit, as we wanted to be in the centre of things. Originally, finding the right place on the islands was my main challenge. I hope that this post will help with your decision-making. 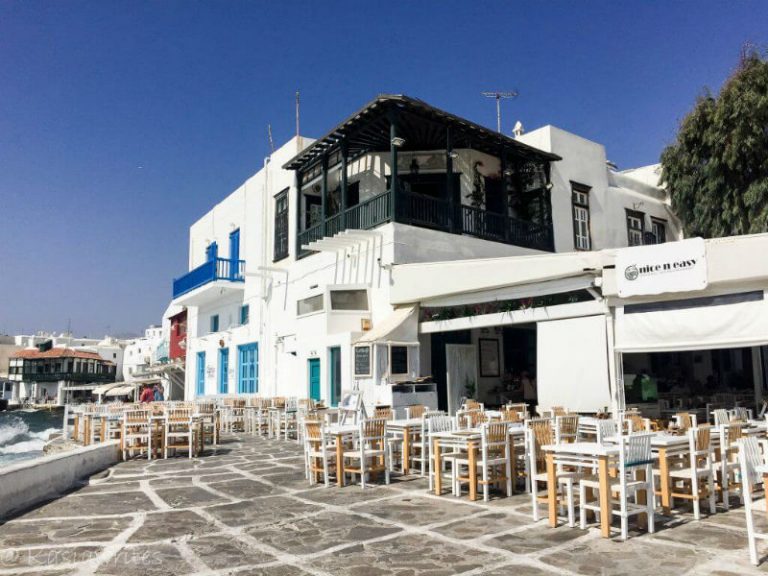 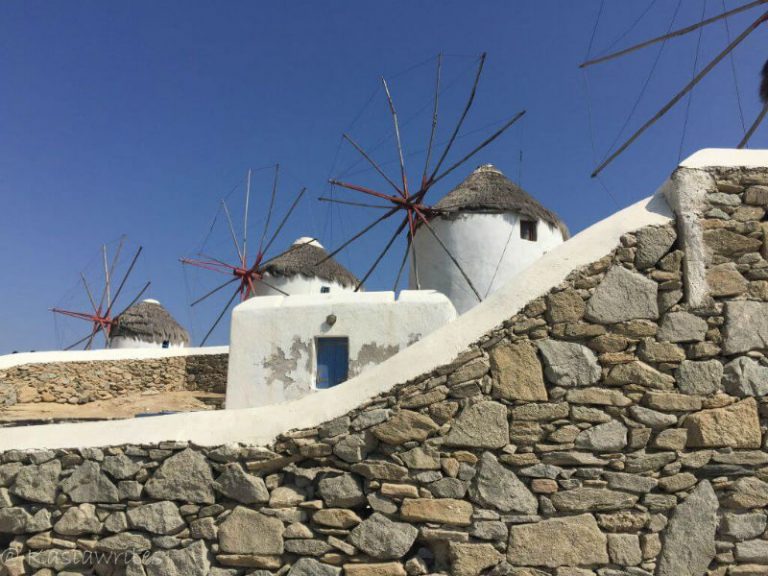 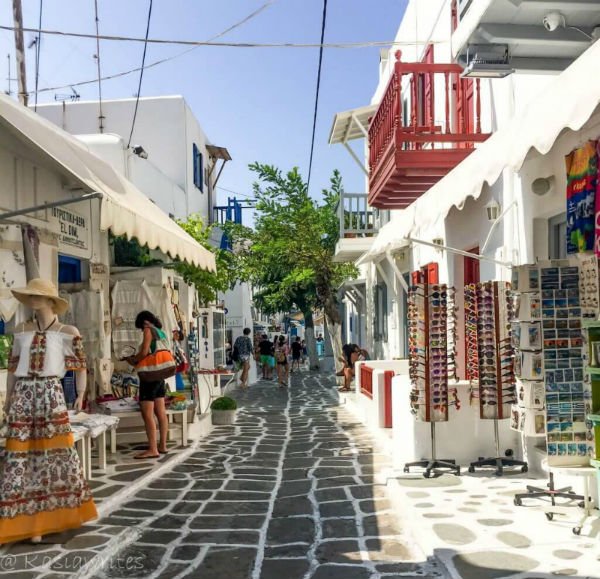 You had me at Mykonos

From the moment we arrived in Mykonos Town, we were completely taken by it. The typical white and blue architecture that comes to mind when you think of Greece, is in full splendor here. The little narrow streets, the bright flowery bushes that flaunt the cube-shaped white buildings and delightful shops, make this place inviting and charming. There is nothing ugly about this place.  I think what makes Mykonos so popular is that everything here is beautiful. That tends to make you feel beautiful too.

This place is stunning in the daylight and at night. You can find hidden gems around every corner. Here you’ll find people from everywhere and hear English spoken on a regular basis. Restaurants offer amazing food, drink and ambiance that make it hard to choose wrong. We loved just wandering around, absorbing the sounds, smells and vibrancy all around us.

It was almost midnight when we arrived at the Scandinavian Bar Club, all ready to dance our hearts away. Apparently, in Mykonos, midnight is “too early” to party.  As we didn’t really have anywhere else to be, we did the only thing that made sense. We opted to have a cold beer at the bar outside the club while waiting for an “appropriate” time to go dancing. This really seemed to be the “pre-bar” for people to drink and hang out at until the club opened.  Seems like a wise choice of progression and a popular one at that.

Around 1 a.m., we finally decided that it was time to go dancing and made our way upstairs to the club. Once in, we found some people already staking their spots on the dance floor. Clearly, they were not up to speed on when you should be going out, as we were. The dance floor filled out pretty fast after that. We drank, we danced and had a great time until the wee hours of the morning. It felt exhilarating, freeing and just plain fun. Then again, I do like to dance. 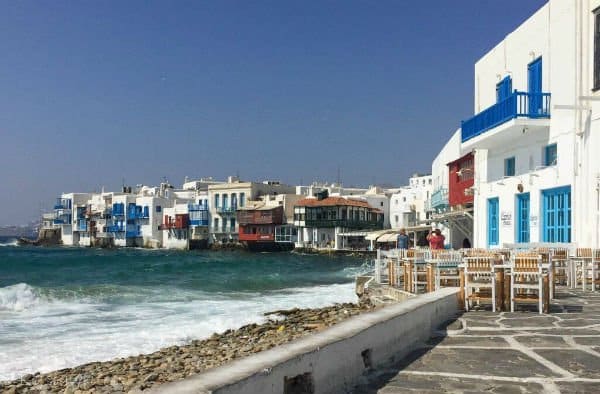 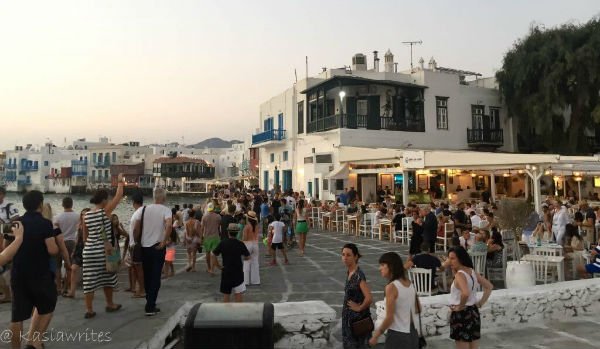 Getting here and around Mykonos

To get to Mykonos, we opted to take a ferry from Athens. There are a number of options as far as ferries go, some faster than others. Tickets can be purchased at many stations in any town, including Athens, Mykonos or Santorini. We got tickets for a 7 a.m. “faster” ferry; however, we ended up arriving at the port few minutes late and missing it.

This meant we lost the money we already paid and had to get tickets again for the next available ferry. This one was about 35 Euros per person. It wasn’t fast and we had to sit for something like four hours on an open deck with not a lot of shade. It wasn’t a pleasant mode of transportation as I tend to get seasick.  Plus, all that heat and salt water.

You can also fly to Mykonos from Athens or other islands that have airports. Flying is quicker, but also more expensive. Depending on the time of the year and where you’re coming from, this might be an easier option if your budget permits it. Keep in mind that during off-season the availability of ferries and flights might be limited. 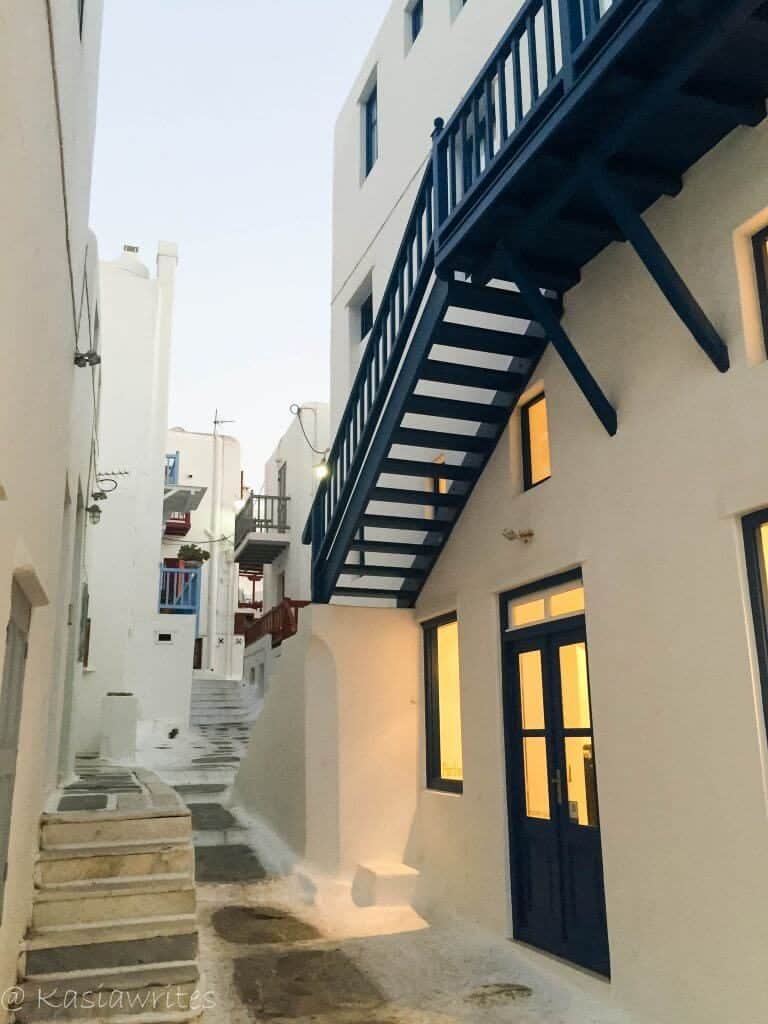 As we stayed in town, we didn’t have a need for transportation other than relying on our feet. As I mentioned above, there are buses that can take you to the beach or to other parts of the island. Car/scooter rental is also available.

Mykonos Town was built as a maze of cobbled streets that you can easily get lost in. This served two purposes, as a protection from the wind and pirate raids. Yup, you read this right, pirates.

Here you’ll also find a local “mascot” – a giant pelican named Petros the Pelican. As I’m terrified of birds, especially large ones, running into Petros was absolutely horrifying. He just walks around. Just like that. I’m not sure if you’ve ever seen one of these birds, but they are giant. Probably the size of a small child. Probably eat them too. Ugh. 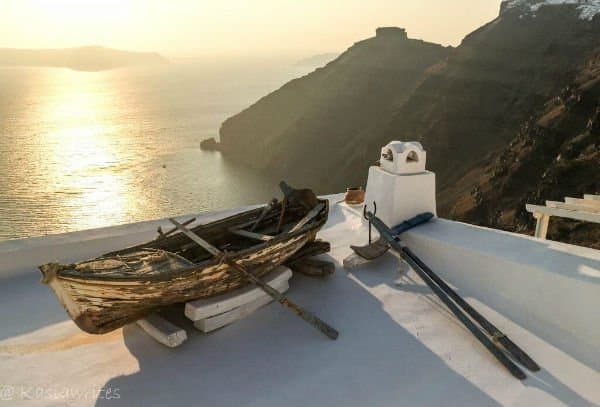 Santorini, or more accurately Fira or Oia, is the iconic image of white houses, often with pools and terraces, clinging onto the steep cliffs. Add a sunset and you got yourself Greek island experience that will make your friends super jealous. Walking around feels like you are in a dream. The terraces, the views of the ocean, blue-domed churches and the sunset are quite spectacular. You can’t go wrong here.

We decided to visit Santorini’s beaches while on the island. We took a day trip to both Perissa and Kamari. It was quite easy to get there by bus from Fira. It wasn’t very expensive and took about 20 min to get to both. Santorini’s beaches are dark and rocky, but that doesn’t take away from the experience. Plus, you can swim in the ocean.

In both places, you can get a free umbrella and chairs if you eat at one of the restaurants dotted along the beach. As you’re going to need to eat, it does make a practical sense to do that. Unlike Italy, I didn’t see as many public spots on the beach. 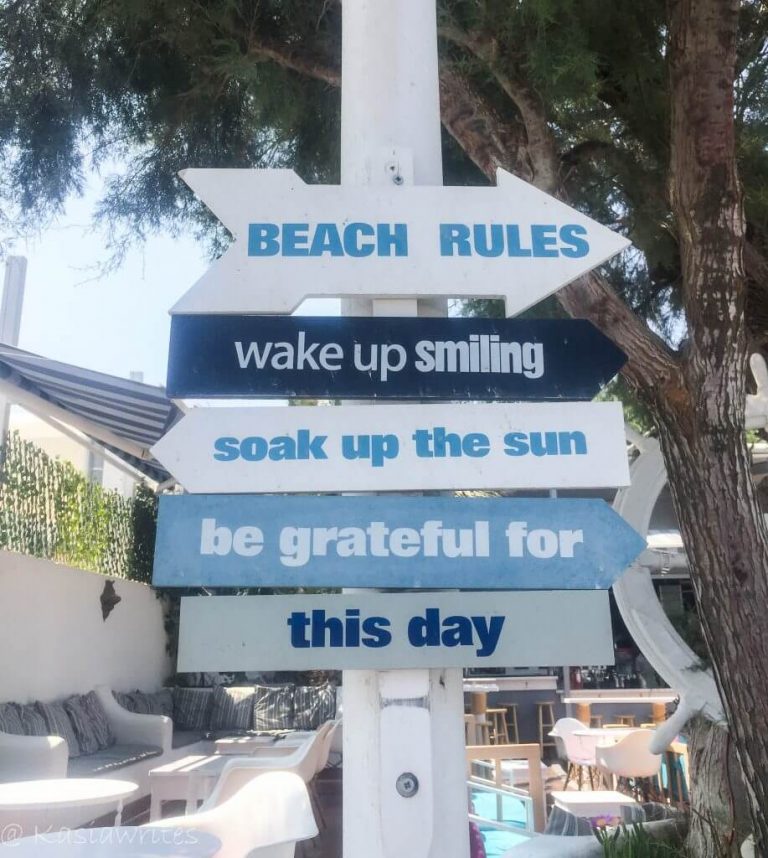 Getting here and around Santorini

We opted once again to take a ferry from Mykonos to Santorini. This time we booked and made it on the faster boat that not only got us to Santorini quicker, but in more style as well. We got seating inside, which helped to pass the time and it was a lot more comfortable than frying on an outside deck. I would totally recommend this option over the other one.

Once we disembarked, we got one of those shuttle bus deals that takes you and bunch of others directly to their hotels. As we didn’t feel like figuring out the logistics, this was an easier and quicker option.  We also used buses to go to the beach and the airport. A cab is always an option too, but most likely, it will cost a bit since the port is far from other towns.

The airport in Santorini is abysmal at best. It’s small, overcrowded and there is no air conditioning. Luckily, we were leaving in the evening, which made this more bearable. Not by much though.

Santorini is widely believed to be a strong candidate for the mythical Atlantis. 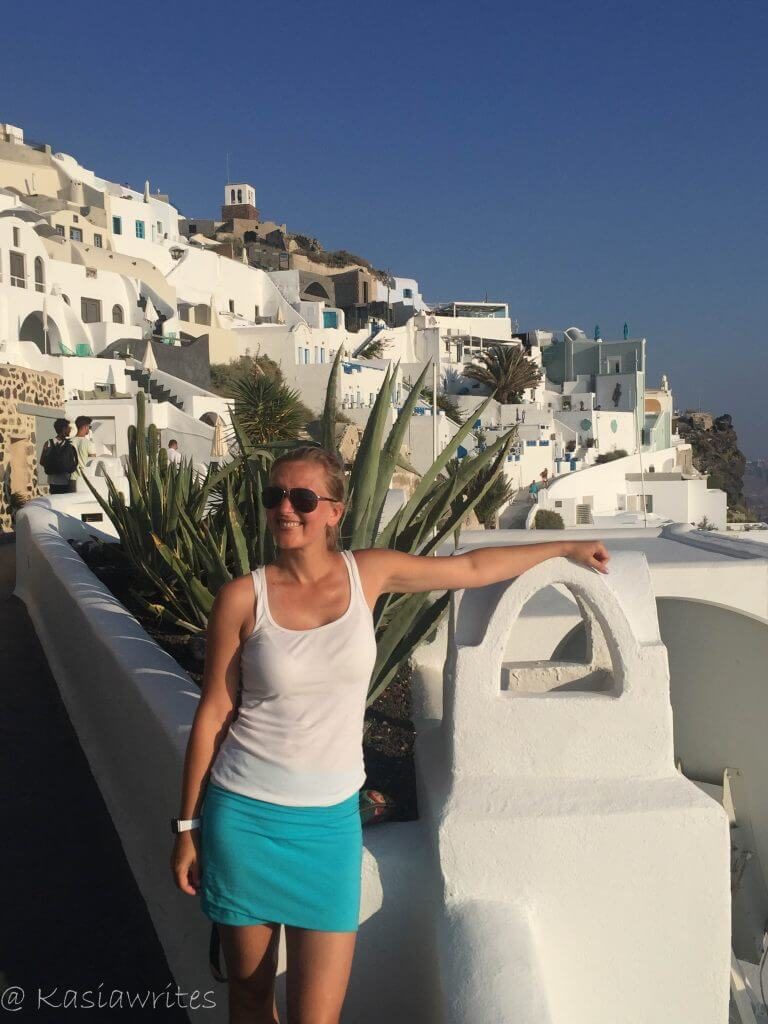 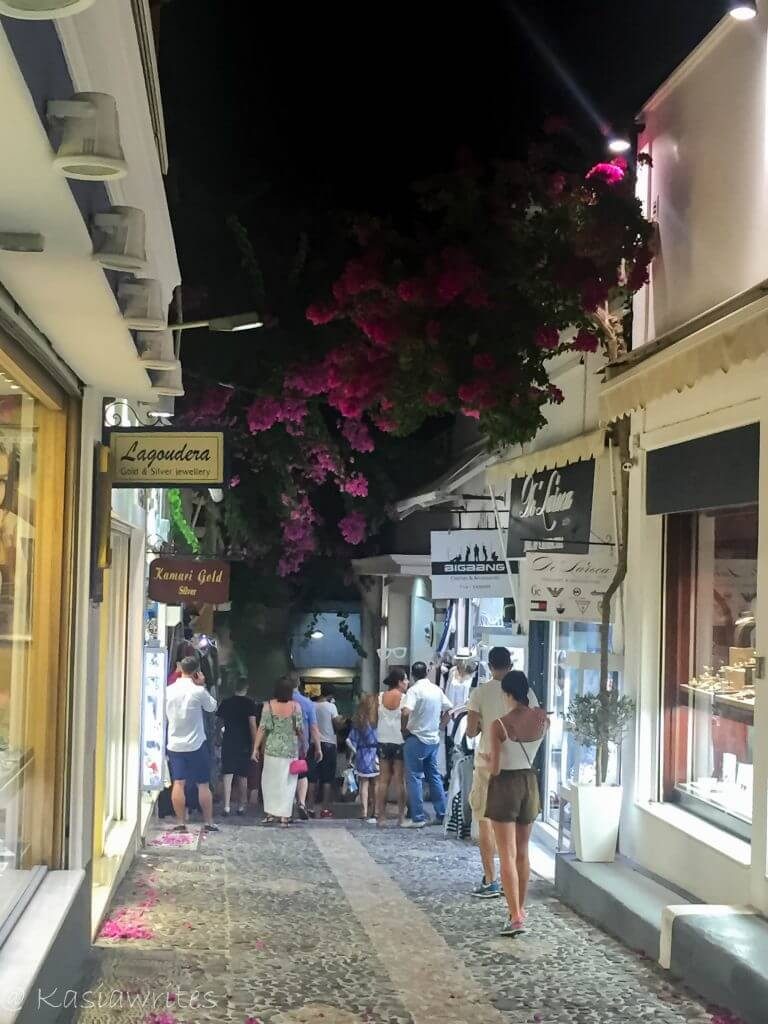 So, which one will it be – Mykonos or Santorini?

I think it can be challenging to choose one. Whether you choose Mykonos or Santorini, you will get an unbelievable experience. If you’re able to squeeze both in, you’ve hit a jackpot. While we enjoyed both, our preference leaned towards Mykonos.

In reality, you only need few days in each place anyway. After all, island hopping implies that you are moving around and there are so many more Greek islands to see. I can’t wait to go back and check out places like Corfu, Crete, Rhodes and the rest!

Have you been to Mykonos or Santorini? Which did you prefer? Let me know! 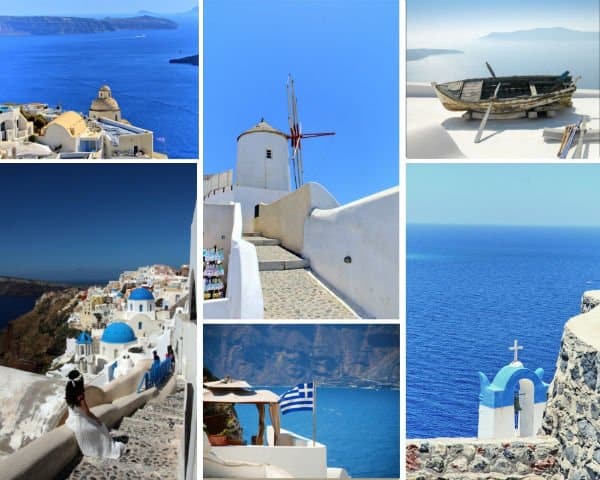 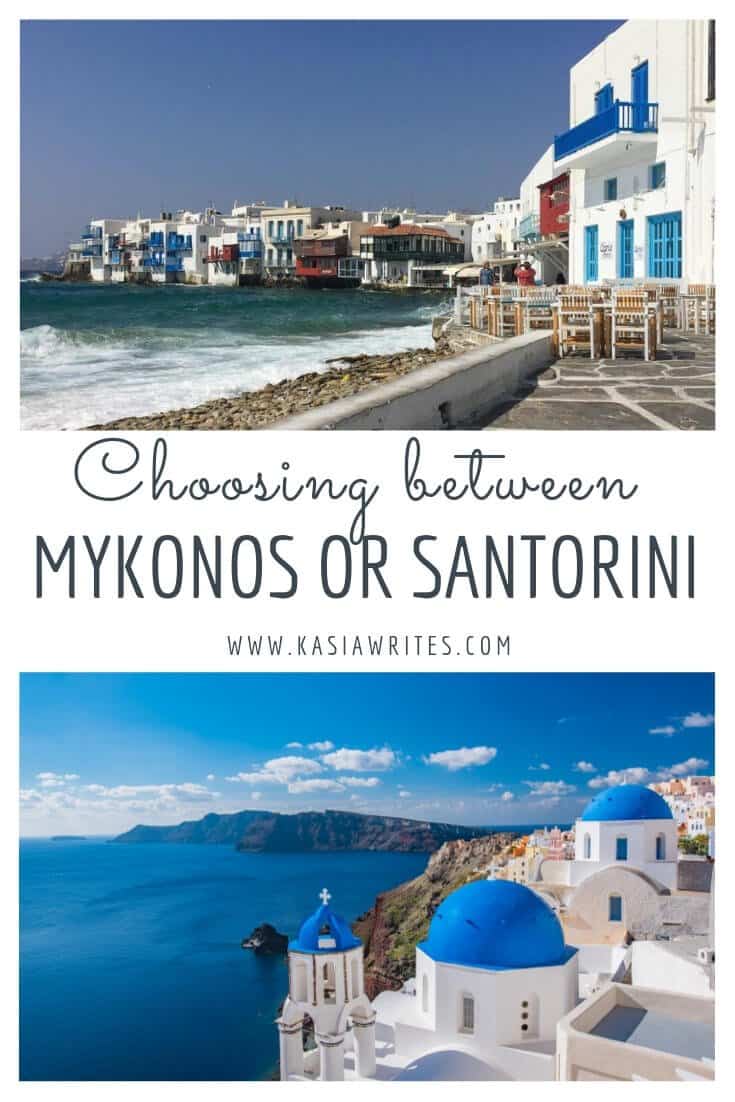 My epic lava and ice caves adventure in Iceland

Why you should visit Rome, the Eternal City

My fave Munich attractions and other things to...

Things to do in Zagreb Croatia you didn’t...

My favourite Italian coastal towns for views and...

Both looks amazing! As we’ve been to Santorini, I want to see Mykonos next time:)

I think you’ll like Mykonos. It’s such a pretty island 😍 Hope you get to go soon!

It is super cute! Day and night 👌🏼

They both look fantastic, it would be hard to choose between the two! Beautiful photos Kasia x

Thank you! Loved both and was glad we were able to do both!

We spent a day on Santorini when on a cruise, but enjoyed it so much went back for a week the following year! Lovely place, but by the end of the week we done it all. That said, we’ll definitely go back in a few years time to see how much it’s changed.

It is a beautiful place. Love your photos 😍😍

They both look great. I can see how it would be hard to choose. Ideally both, right. That’s cool you could see and compare both of them. The small street with shops in Mykonos was cute. I want to see Petros the Pelican 😉

😱 he was terrifying but I’m pretty sure if you search for him on Instagram you might find a pic!

You’re right, I did see it on Instagram. I’m surprised by the colour though. It’s kind of a pink colour. I’ve only seen dark brown/grey pelicans.

I was too terrified to notice the colour

Haven’t been to either unfortunately but both look stunning. If I had to choose one, I think Santorini might be for me. Great photos.

A night of dancing sounds fun and my kinda thing too, Kasia. The photos are so beautiful particularly the one of the boat atop the terrace. It is poetic.
Given the option, I would skip neither island 🙂 xx

Good call! They are really both with visiting 😀 Plus the dancing was so much fun 💃🏼

Great post Kasia, love your photos and looks like you guys had an amazing time at both islands. Personally I am yet to discover Greece! Another one on the bucket list. 🙂

It took me very long time to get there, but totally worth it!

Both islands would be fun!

Absolutely! We couldn’t decide to we did both 😬

Oh we understand. We only had hours on each when on a cruise…